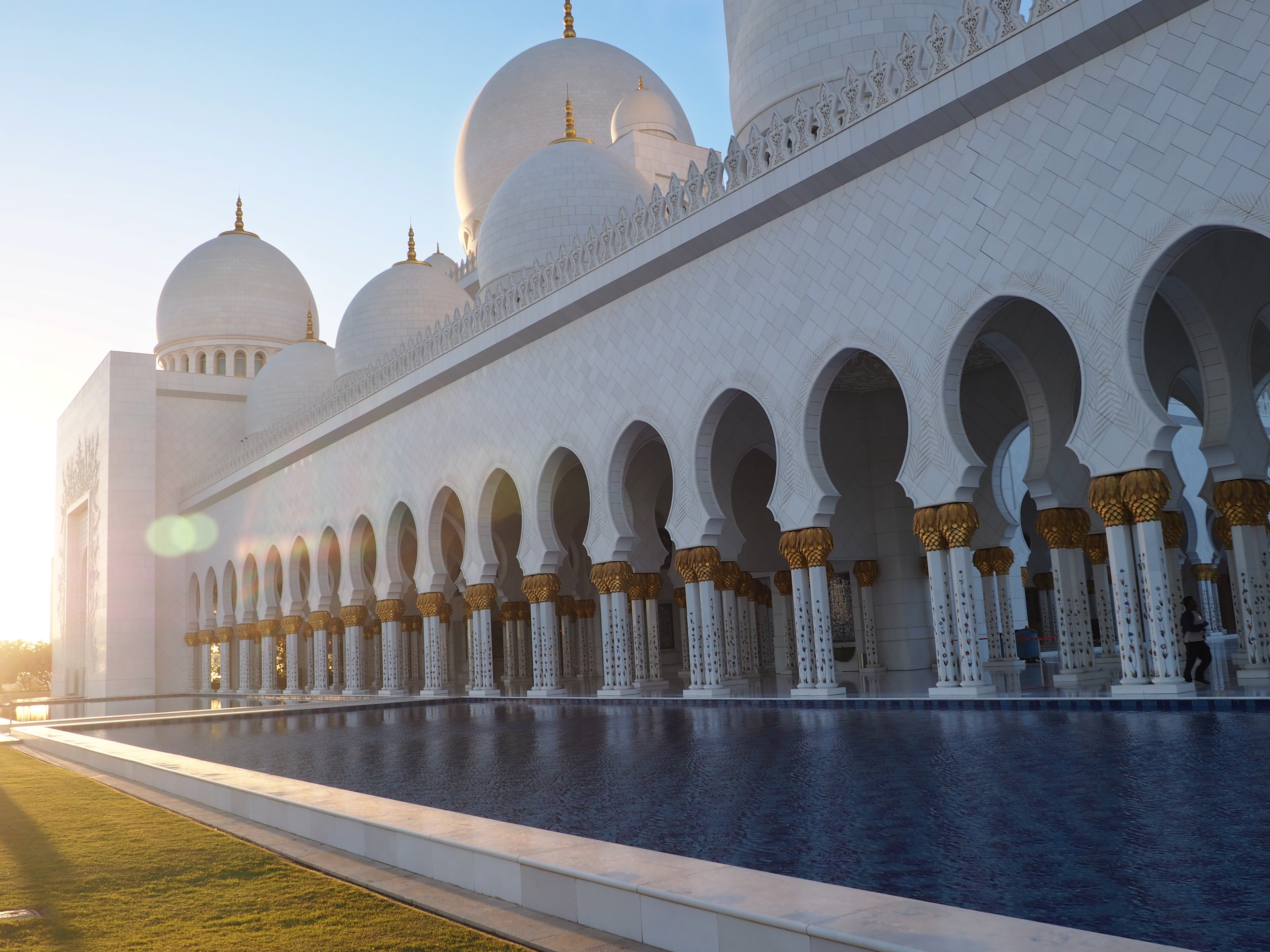 The Grand Mosque has always held a place of intrigue within me.  It wasn’t until my last trip to Dubai that I decided it was a must see this time around.  Circumstances throughout the day prevented me from the mid-afternoon stroll I had planned on and instead, left me exploring the grounds at dusk.

A stealthy crescent moon peeked out above the bulbous Moroccan inspired architecture like a beautiful lunar accent and glowed softly against a pale purple sky.    The call to prayer suddenly came on and as the hypnotic cry drifted through the air and the wind gently twirled around my head scarf, I felt a great sense of peace come over me.  The Grand Mosque is an incredible sight to see, meticulously handcrafted and breathtaking in every direction.  Regardless of religion, there’s a level of artistry and respect unquestionably due to Sheikh Zayed and his team for constructing such a magnificent piece of cultural history.  I learned a little something along my journey through the Grand Mosque and now, so can you. 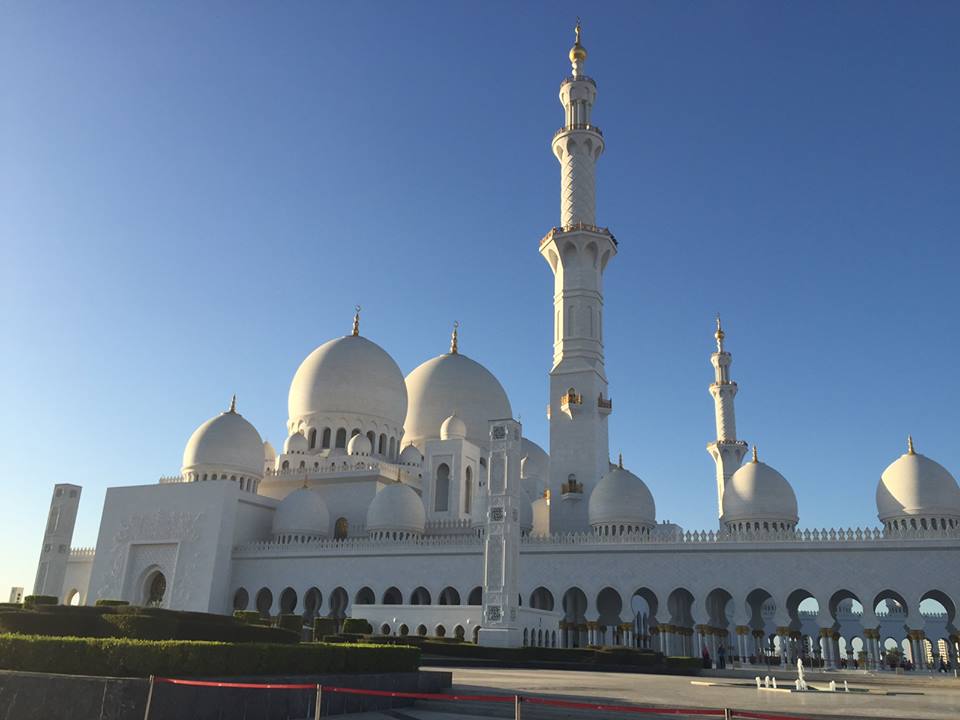 10.  Sheikh Zayed Grand Mosque is the third largest mosque in the world. 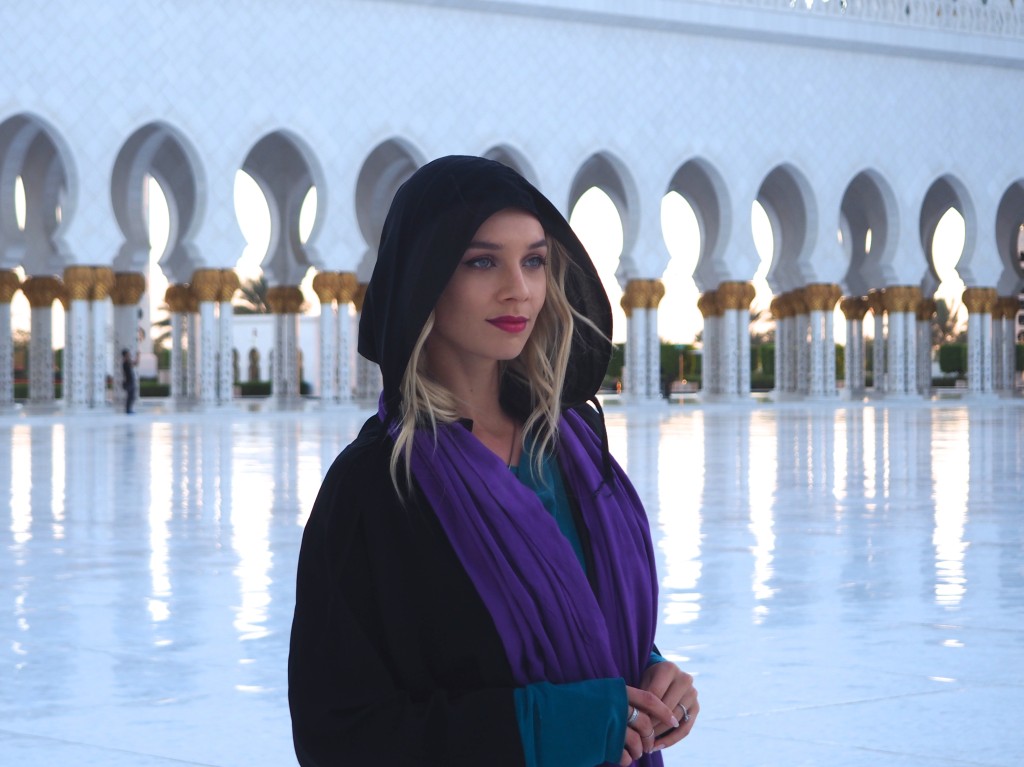 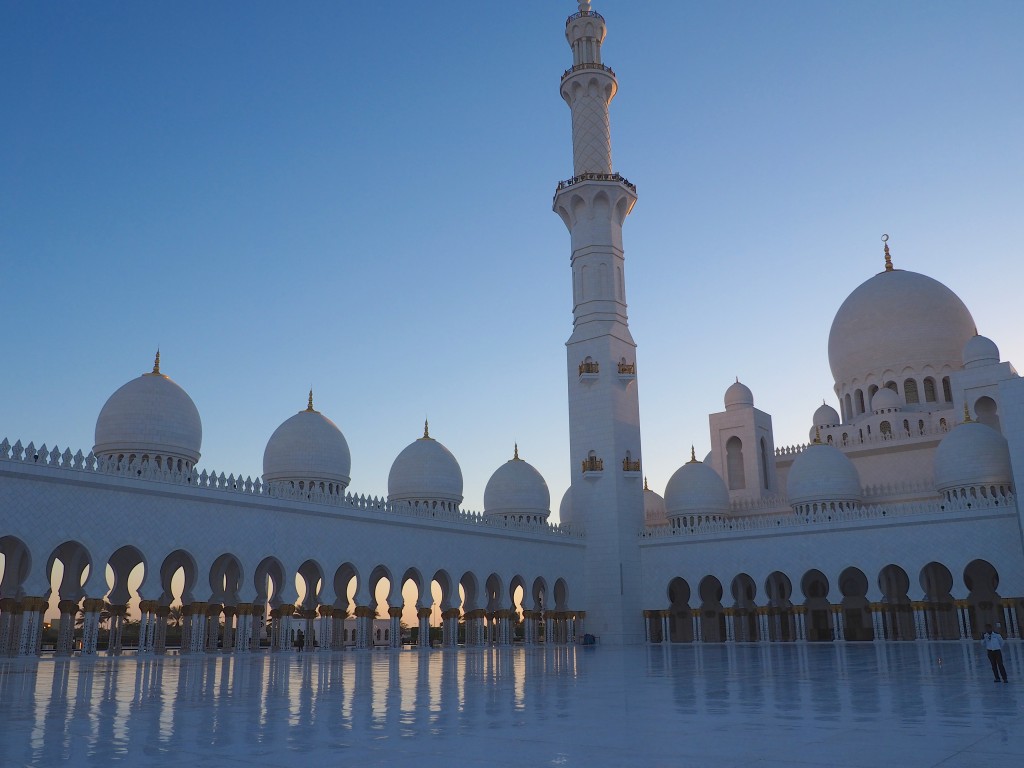 8.  There are 82 marble domes, designed with Moroccan influence. 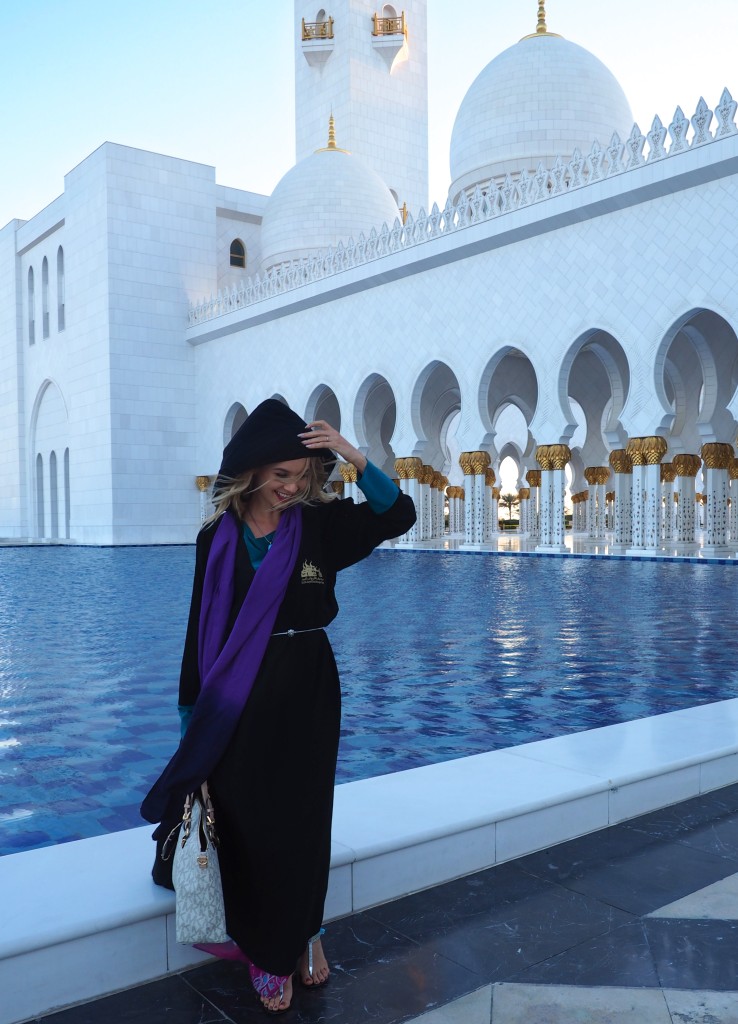 7.  The Sheikh Zayed Grand Mosque is also the last resting place of the man himself, who passed away in 2004. 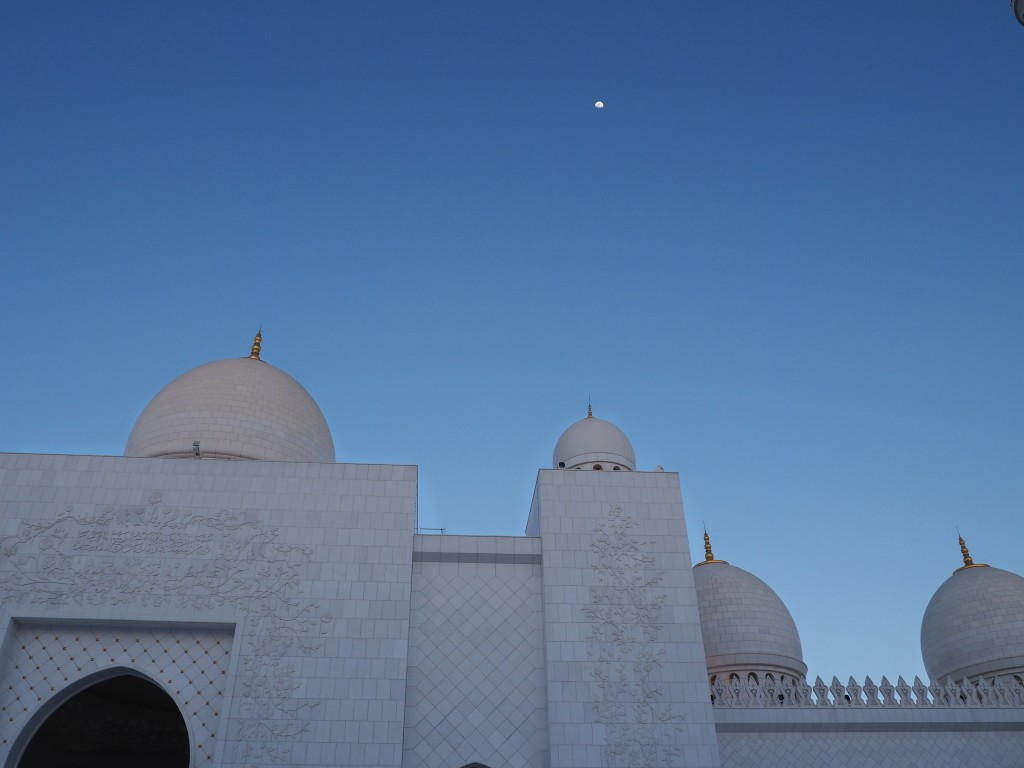 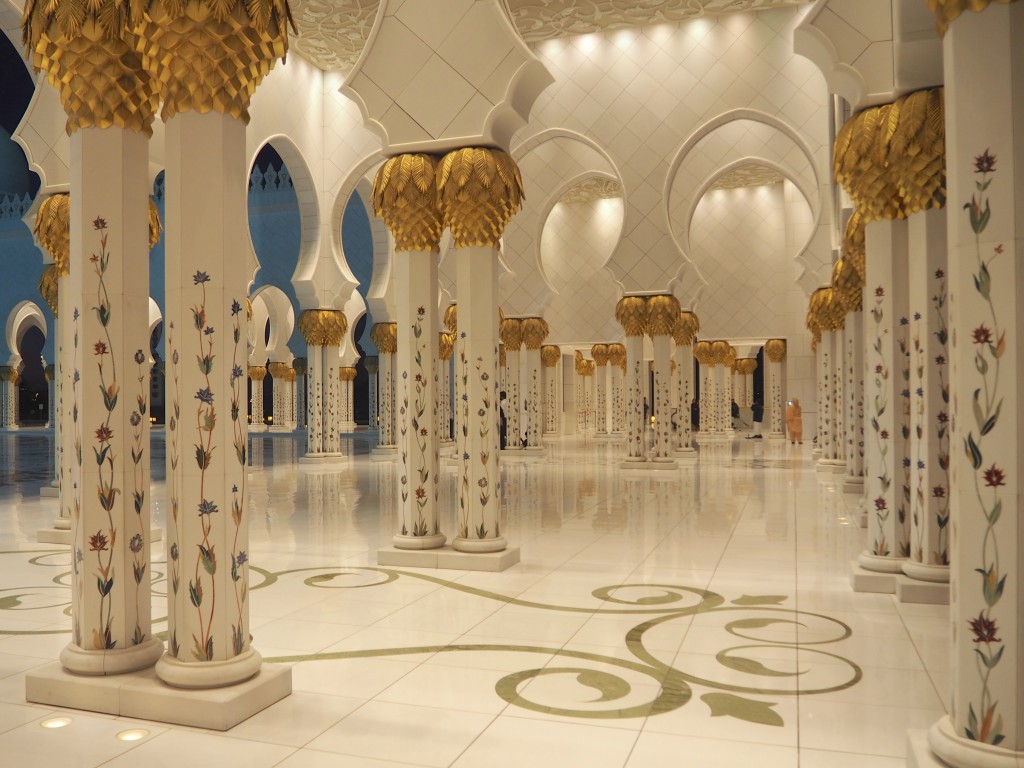 5.  There are more than 1,000 columns made of inlaid marble panels donning floral designs with semi-precious stones and another 96 columns in the main prayer hall. 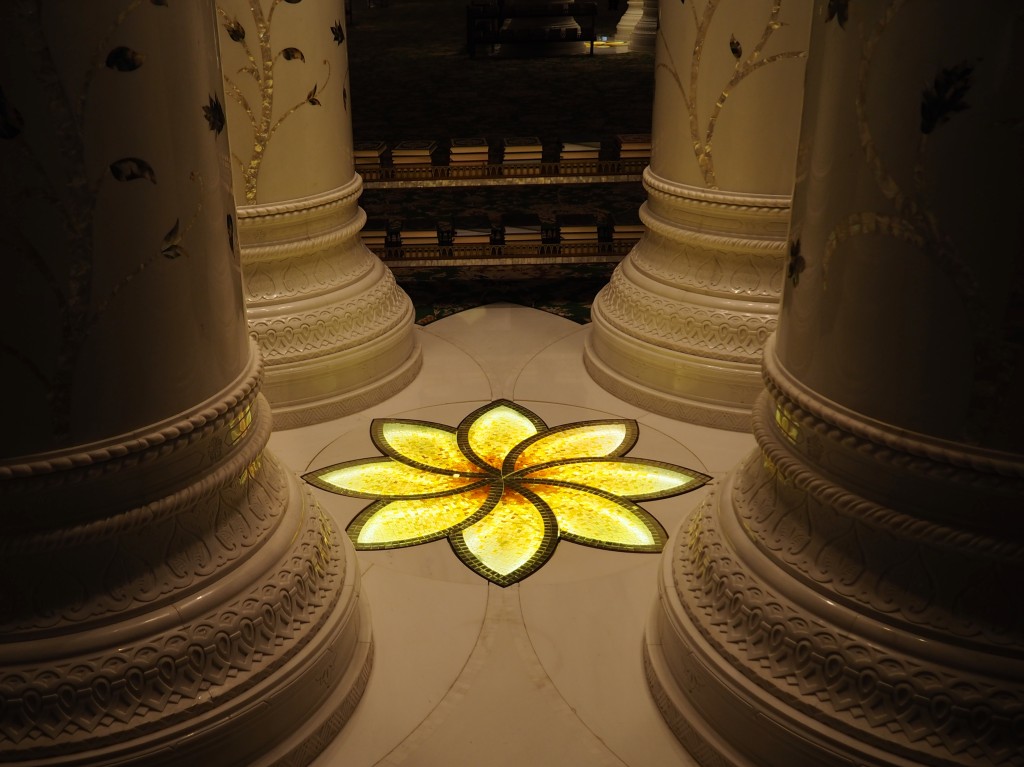 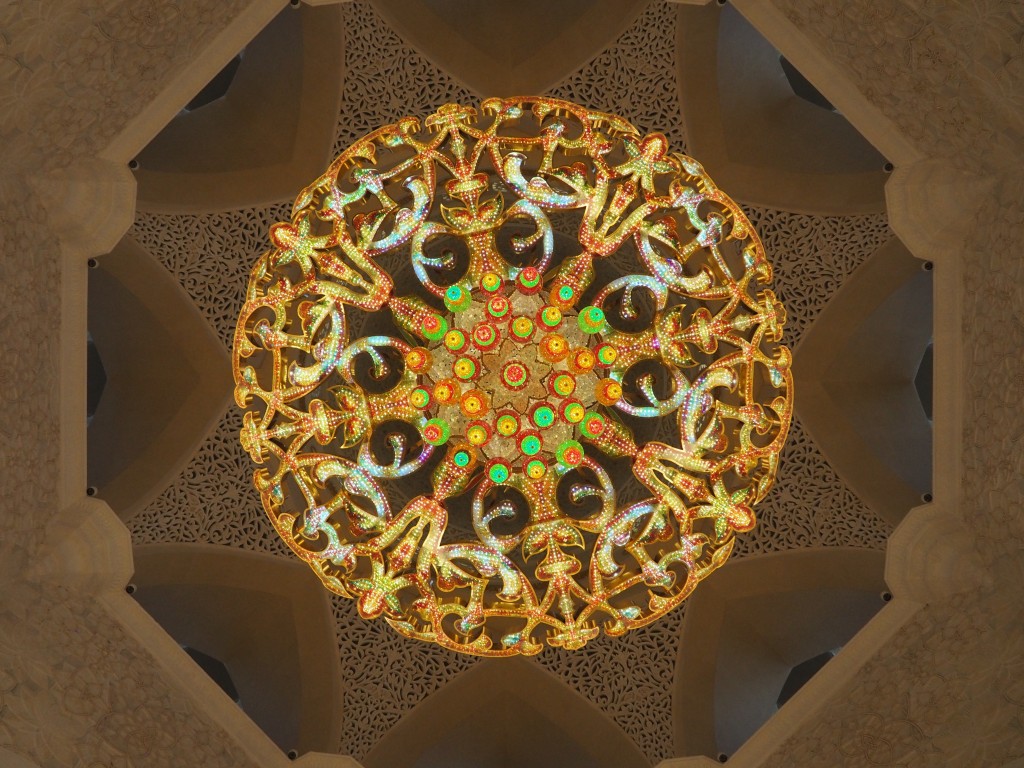 3.  Inside you will find the world’s largest chandelier, made of thousands of Swarovski crystals with the glasswork from Italy. 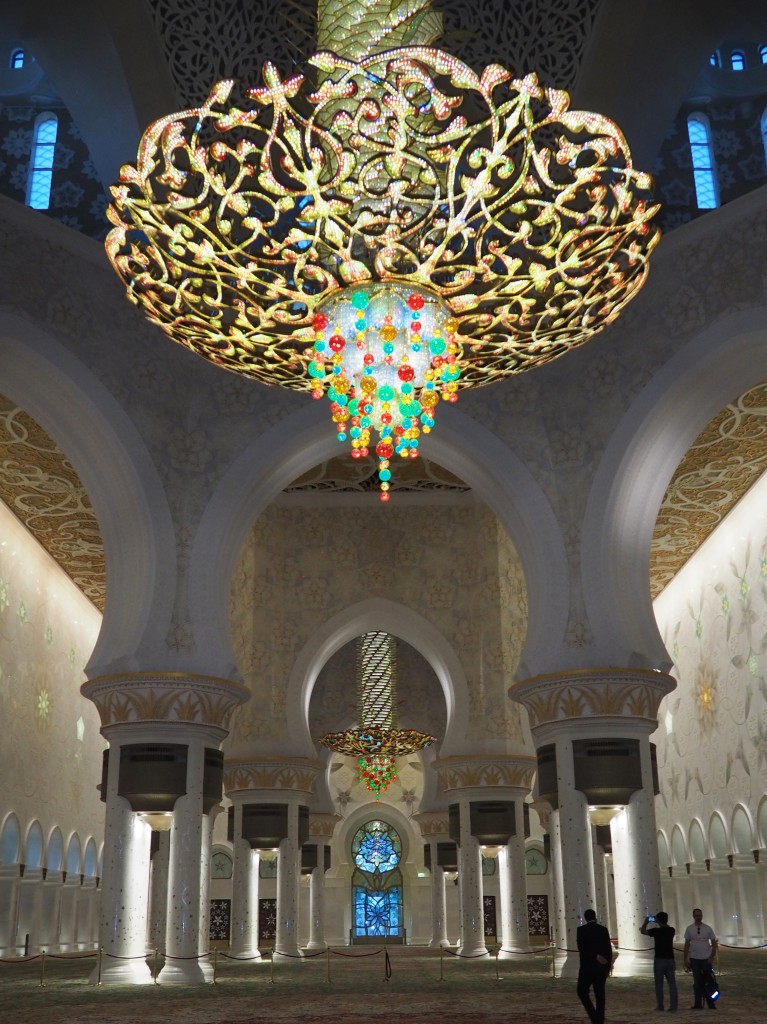 2.  Once inside you’ll notice the world’s largest hand-knotted carpet, designed by Iranian artist Ali Khaliqi and hand crafted by 1,300 artisans 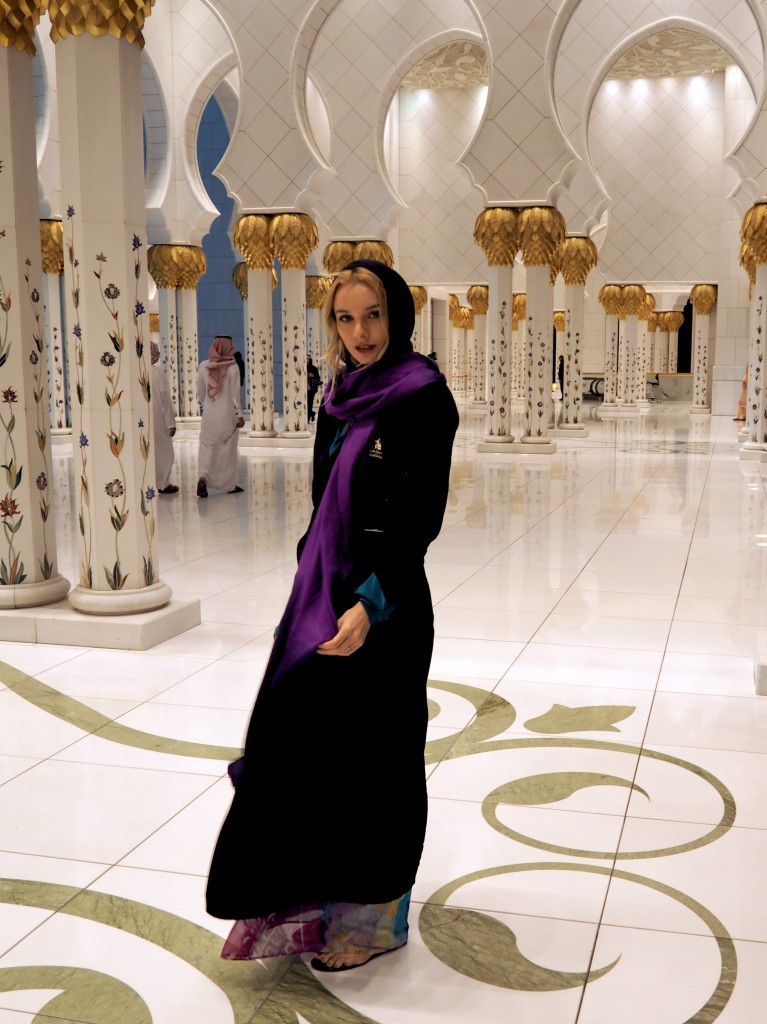 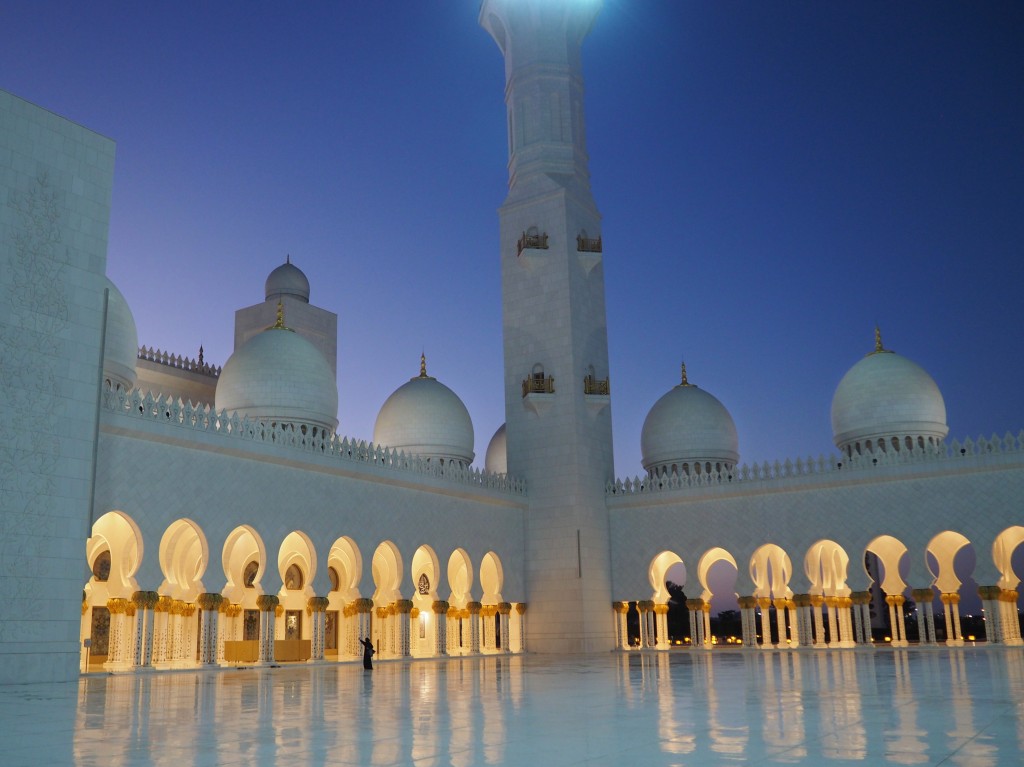 1.  A unique lighting system gradually changes with the phases of the moon to become lighter as the moon becomes full, making for a breathtaking backdrop.

Mom, model, host, traveler and co-founder of Yourlixir superfoods! Life is an adventure and I'm here to share how our little family lives it with style - DeziStyle. 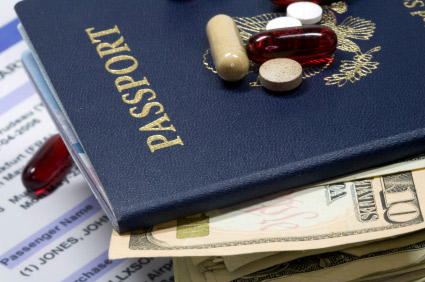 Travel Tips: How to Keep Your Immune System Happy & Healthy on the Road 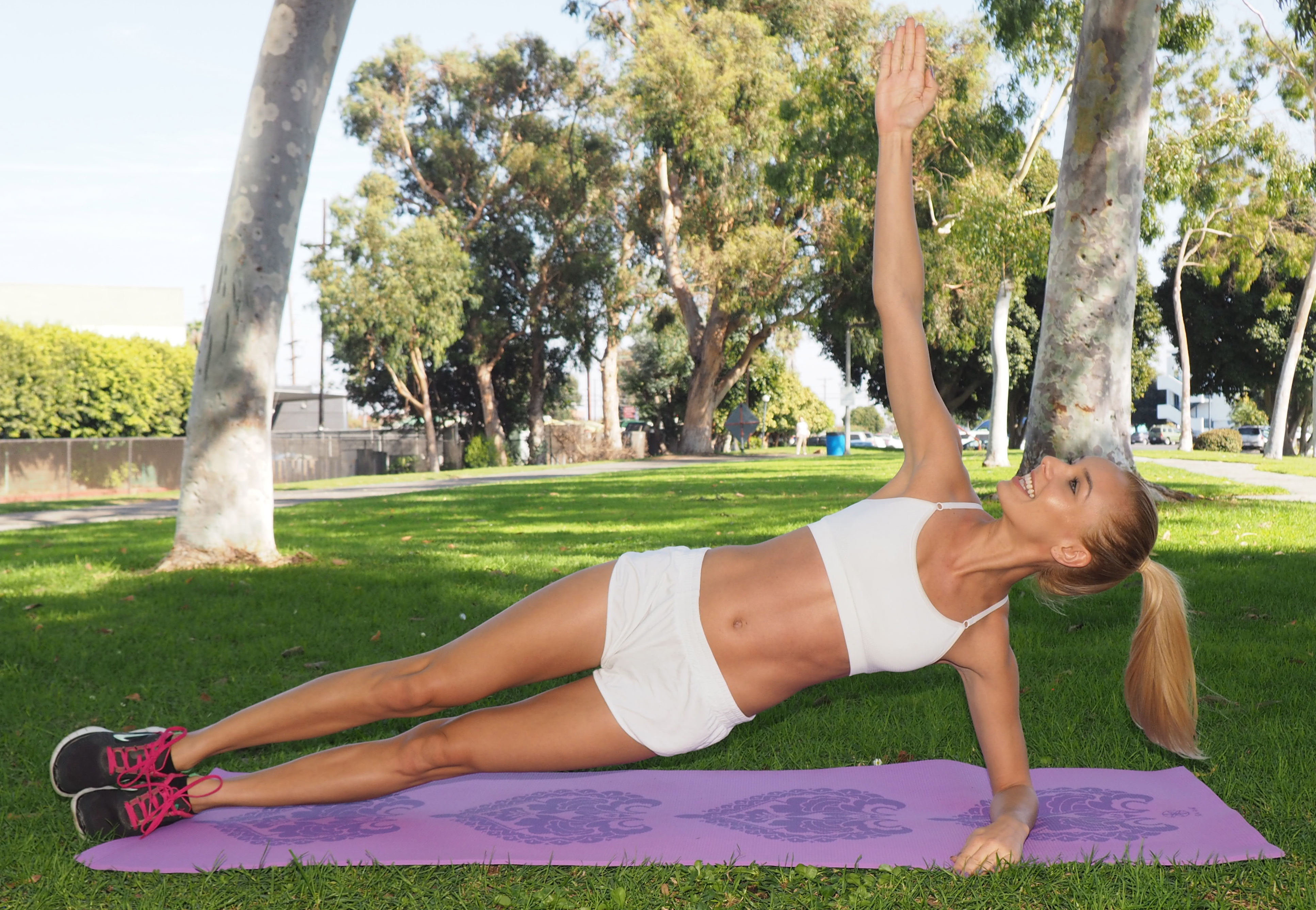 The Most Efficient 10 Minute Workout for Life on the Go 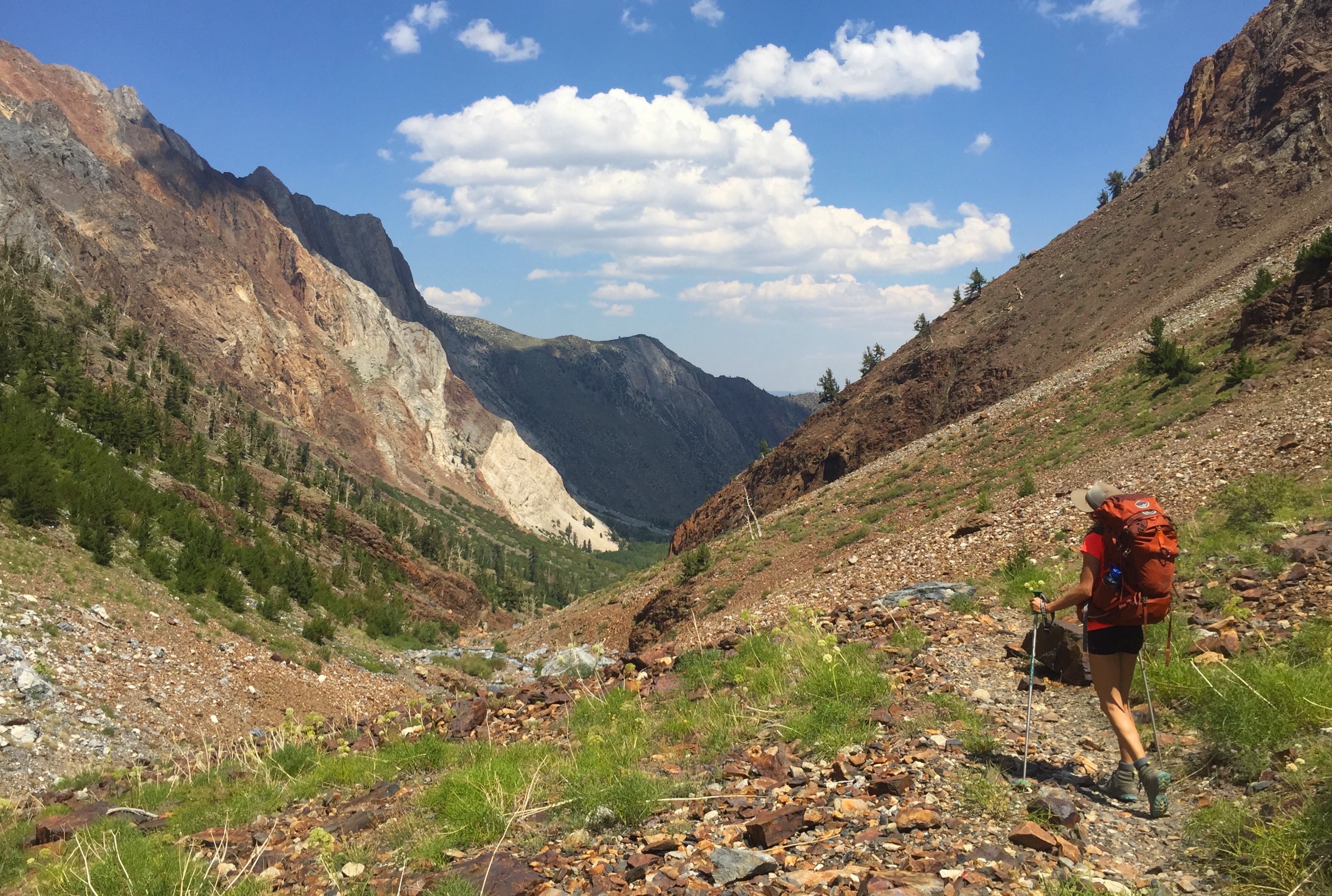 Juicing 101: A Guide to Picking the Perfect Produce 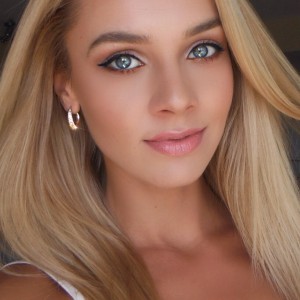 Over the last 20 years I’ve split my time living between Miami and Los Angeles as a model, actress, red carpet host, co-founder of Yourlixir superfoods, and business developer for R.A.W., but one of my proudest and most valiant moments came in June of 2018 when Richie and I welcomed our daughter, Fiona Nova, earth-side in Barcelona in an all-natural home birth abroad. Follow along on our exciting journey of travel, parenthood, and startup life by subscribing below now!

3 things you can do to feel sane during quarantine

The only person I'd share my spaghetti with🍝 #F

In times where my emotional strength is being test

Aw, shucks. 🙈 Thank you for all the birthday lo

If this year has taught me anything, it's to keep

This top + a ton of new pieces were just added to

Here lives a little piece of my heart 🌊 #SantaB

Anyone else feel strange leaving the house without